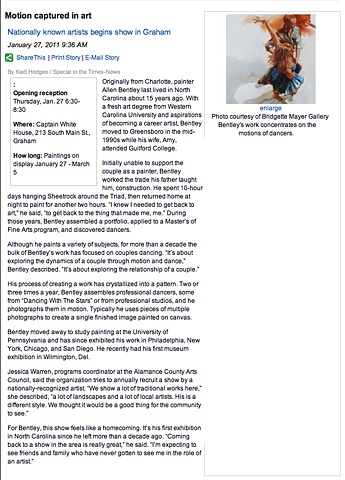 Motion captured in art
< previous next >

Originally from Charlotte, painter Allen Bentley last lived in North Carolina about 15 years ago. With a fresh art degree from Western Carolina University and aspirations of becoming a career artist, Bentley moved to Greensboro in the mid-1990s while his wife, Amy, attended Guilford College.

Initially unable to support the couple as a painter, Bentley worked the trade his father taught him, construction. He spent 10-hour days hanging Sheetrock around the Triad, then returned home at night to paint for another two hours. “I knew I needed to get back to art,” he said, “to get back to the thing that made me, me.” During those years, Bentley assembled a portfolio, applied to a Master’s of Fine Arts program, and discovered dancers.

His process of creating a work has crystallized into a pattern. Two or three times a year, Bentley assembles professional dancers, some from “Dancing With The Stars” or from professional studios, and he photographs them in motion. Typically he uses pieces of multiple photographs to create a single finished image painted on canvas.

Bentley moved away to study painting at the University of Pennsylvania and has since exhibited his work in Philadelphia, New York, Chicago, and San Diego. He recently had his first museum exhibition in Wilmington, Del.

Jessica Warren, programs coordinator at the Alamance County Arts Council, said the organization tries to annually recruit a show by a nationally-recognized artist. “We show a lot of traditional works here,” she described, “a lot of landscapes and a lot of local artists. His is a different style. We thought it would be a good thing for the community to see.”

For Bentley, this show feels like a homecoming. It’s his first exhibition in North Carolina since he left more than a decade ago. “Coming back to a show in the area is really great,” he said. “I’m expecting to see friends and family who have never gotten to see me in the role of an artist.”