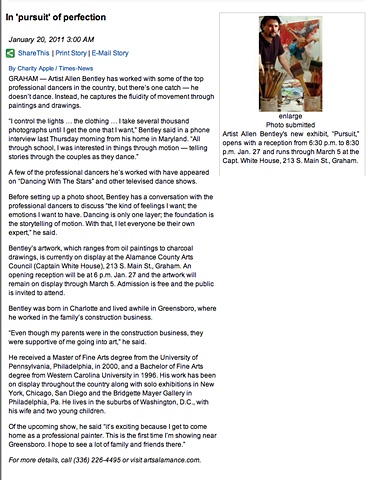 In 'pursuit' of perfection
< previous next >

GRAHAM — Artist Allen Bentley has worked with some of the top professional dancers in the country, but there’s one catch — he doesn’t dance. Instead, he captures the fluidity of movement through paintings and drawings.

“I control the lights … the clothing … I take several thousand photographs until I get the one that I want,” Bentley said in a phone interview last Thursday morning from his home in Maryland. “All through school, I was interested in things through motion — telling stories through the couples as they dance.”

A few of the professional dancers he’s worked with have appeared on “Dancing With The Stars” and other televised dance shows.

Before setting up a photo shoot, Bentley has a conversation with the professional dancers to discuss “the kind of feelings I want; the emotions I want to have. Dancing is only one layer; the foundation is the storytelling of motion. With that, I let everyone be their own expert,” he said.

Bentley’s artwork, which ranges from oil paintings to charcoal drawings, is currently on display at the Alamance County Arts Council (Captain White House), 213 S. Main St., Graham. An opening reception will be at 6 p.m. Jan. 27 and the artwork will remain on display through March 5. Admission is free and the public is invited to attend.

Bentley was born in Charlotte and lived awhile in Greensboro, where he worked in the family’s construction business.

“Even though my parents were in the construction business, they were supportive of me going into art,” he said.

He received a Master of Fine Arts degree from the University of Pennsylvania, Philadelphia, in 2000, and a Bachelor of Fine Arts degree from Western Carolina University in 1996. His work has been on display throughout the country along with solo exhibitions in New York, Chicago, San Diego and the Bridgette Mayer Gallery in Philadelphia, Pa. He lives in the suburbs of Washington, D.C., with his wife and two young children.

Of the upcoming show, he said “it’s exciting because I get to come home as a professional painter. This is the first time I’m showing near Greensboro. I hope to see a lot of family and friends there.”