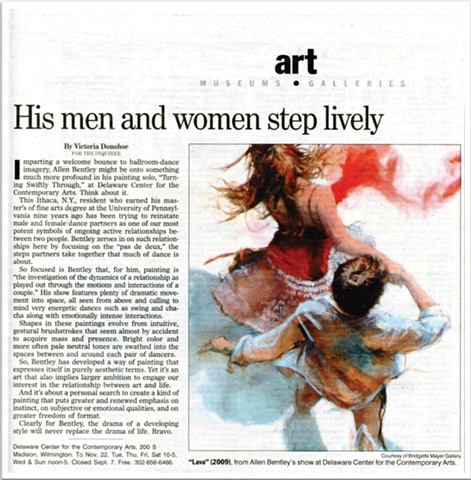 His men and women step lively
< previous next >

Imparting a welcome bounce to ballroom-dance imagery, Allen Bentley might be onto something much more profound in his painting solo, "Turning Swiftly Through," at Delaware Center for the Contemporary Arts. Think about it.

This Ithaca, N.Y., resident who earned his master's of fine arts degree at the University of Pennsylvania nine years ago has been trying to reinstate male and female dance partners as one of our most potent symbols of ongoing active relationships between two people. Bentley zeroes in on such relationships here by focusing on the "pas de deux," the steps partners take together that much of dance is about.

So focused is Bentley that, for him, painting is "the investigation of the dynamics of a relationship as played out through the motions and interactions of a couple." His show features plenty of dramatic movement into space, all seen from above and calling to mind very energetic dances such as swing and cha-cha along with emotionally intense interactions.

Shapes in these paintings evolve from intuitive, gestural brushstrokes that seem almost by accident to acquire mass and presence. Bright color and more often pale neutral tones are swathed into the spaces between and around each pair of dancers.

So, Bentley has developed a way of painting that expresses itself in purely aesthetic terms. Yet it's an art that also implies larger ambition to engage our interest in the relationship between art and life.

And it's about a personal search to create a kind of painting that puts greater and renewed emphasis on instinct, on subjective or emotional qualities, and on greater freedom of format.